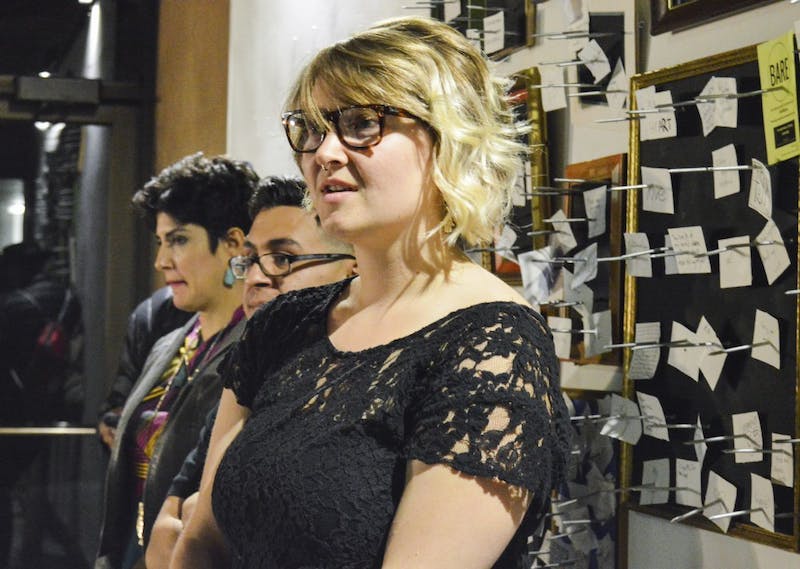 
UNM super senior Mo Elizabeth Fiebiger graduates in December with a bachelor of arts degree in studio arts and psychology. She decided to do an honors thesis for studio arts on the topic of vulnerabilities.

“When I did my show, I really wanted to embody that through artwork,” Fiebiger said.

She had two pieces for the project:

“One was a wall of nails, and it was supposed to invoke the feeling of physical fear; and to add a participant component, I had individuals write down what makes them vulnerable,” Fiebiger said. “Then there was a second aspect in the Brazilian wax performance, so people would come and watch the performance and I wanted them to feel that they saw these people putting themselves out there.”

She chose to use Brazilian wax because she considers it to be a profound experience with radical meaning.

“It really allows people to put themselves out there, and it was different,” Fiebiger said. “I’ve never seen anything like that: a combination of being my own expression, and to stand out. 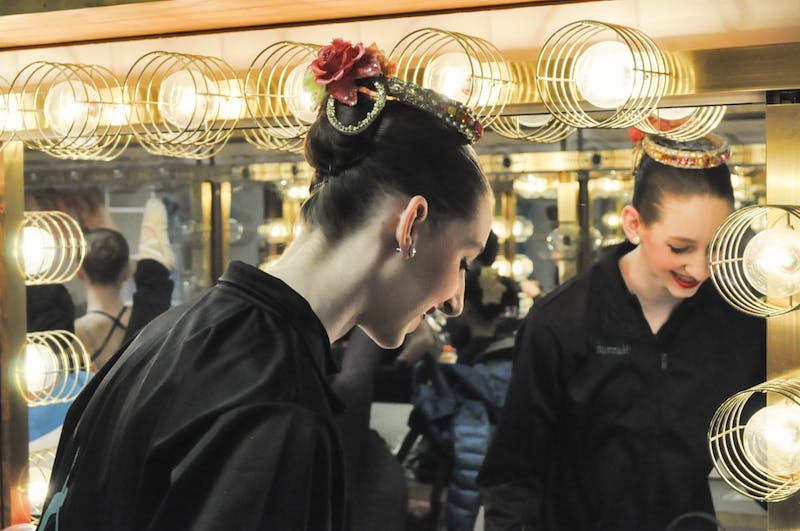 Warming up for the winter


The New Mexico Ballet Company held dress rehearsals at Popejoy Hall on Nov. 25 and 27 for its performance of “The Nutcracker Ballet”. The ballet follows a young girl, Clara, played by 10-year-old Emma Cilke, whose Nutcracker comes to life and takes her on an adventure in another world.

American Ballet Theatre dancers Christine Shevchenko and Alexandre Hammoudi joined the production as the Sugar Plum Fairy and her Cavalier. Upcoming performances are in Popejoy Hall on Saturday at 2 p.m. and 7 p.m.; and Sunday at 2 p.m. 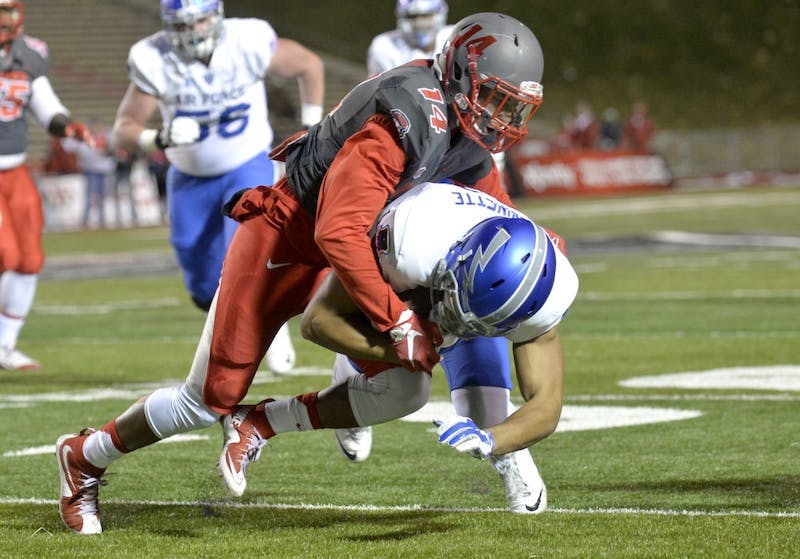 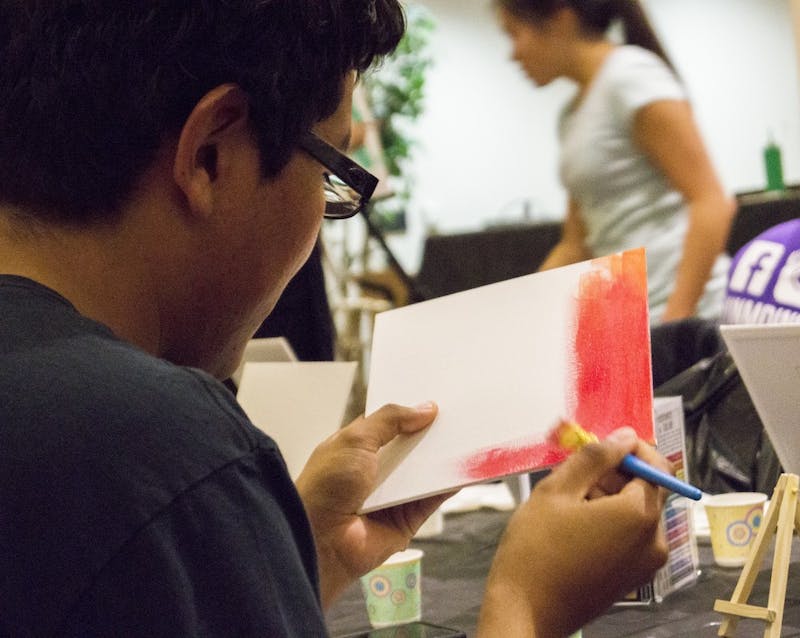 
Campus Office for Substance Abuse Prevention (COSAP) is an on-campus program that supports UNM students with abuse prevention strategies, services, and gives information to ensure the well being of UNM students.

On Wednesday night COSAP conducted an event “Paint your Heart Out” in the Student Union Building Atrium. Students painted a sunflower, which was the theme of the program.

The art studio student, and COSAP’s graphic artist, Rachel Abeyta took the lead of the program and taught the participants different painting technique.

This was COSAP’s second annual Diary of a Lady Lobo (DOLLS) event. An additional function of the event was also to educate how alcohol affects women’s bodies. 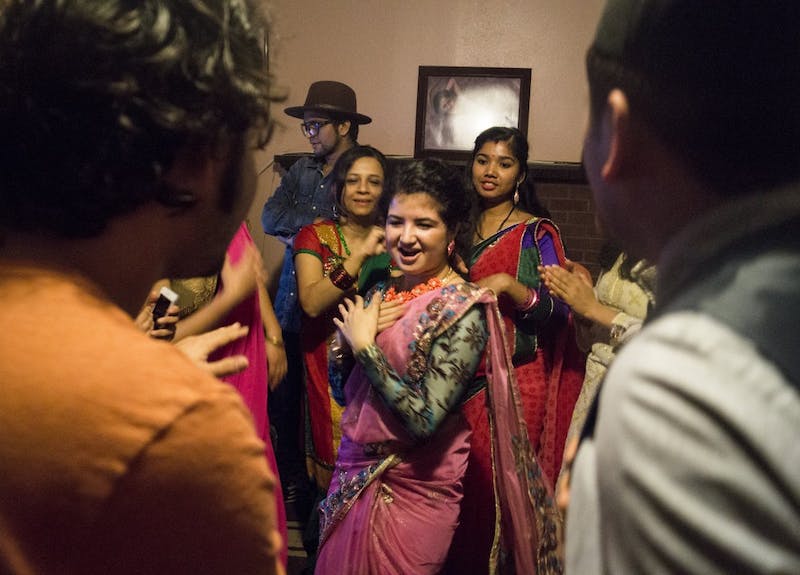 
Tihar is a Hindu festival celebrated every year during spring season. It is one of the largest and brightest festivals for Hindu devotees. This festival has spiritual significance, in that it celebrates the victory of light over darkness, and knowledge over ignorance.

A part-time UNM faculty member at the Department of Economics, Dr. Doleswar Bhandari is from Nepal. Bhandari and his wife hosted the Tihar program at his house on Friday.

Nepalese students at UNM performed cultural dances and sang various Nepalese folk songs along with Deusi Rey, which is a traditional song performed during Tihar. At the end of these songs, Bhandari’s wife served Nepalese foods and gave money to the performers, which are also traditional acts. 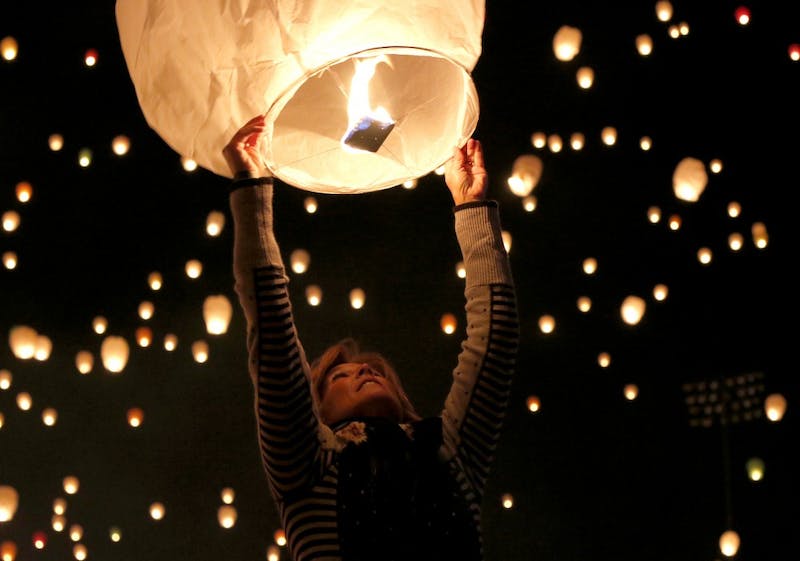 
Albuquerque held it's first lantern festival Saturday Nov. 14, 2015. The event took place at Sandia Speedway where it ran from 1pm to 8pm with live music. The people gather around bonfire pits across the field. Each person received a box with materials to make s'mores and to light the lanterns that lit up the sky, sending their wishes, and hopes. At the end of the event, Fire Muse Circus performed. 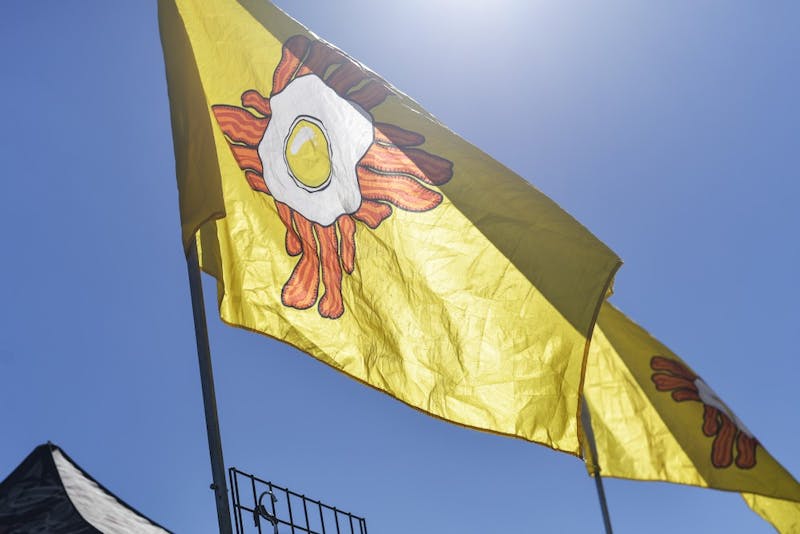 
Bacon Fest was on Saturday, Nov. 7 at Balloon Fiesta Park from 10 a.m. to 5 p.m. Beer bacon, blues and Harley-Davidson motorcycles brought out Albuquerque’s fall fashion of sunglasses and blue jeans. Eliza Trujillo, a Bacon Fest participant, said that she noticed a large number of breweries, but did not see anywhere to get a piece of bacon by itself. 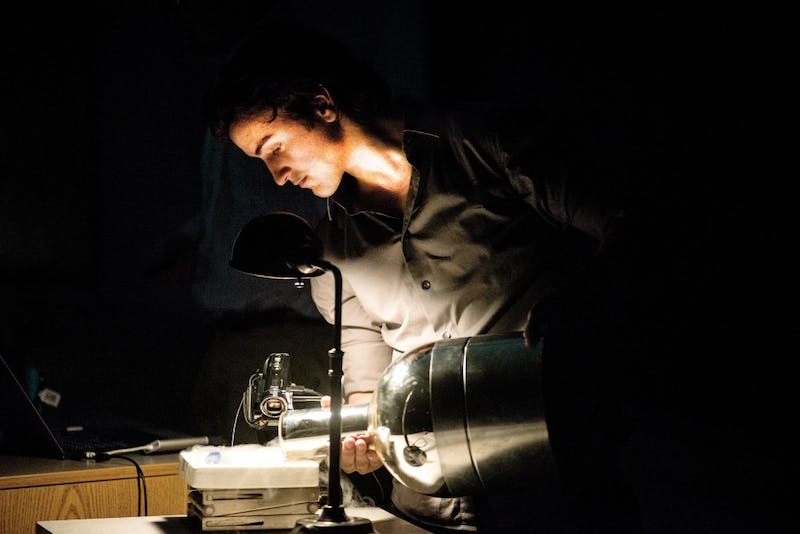 
The laws of Sir Isaac Newton and Michael Faraday are things people live by every day but they are also what seven students displayed to a filled lecture hall Wednesday night.

Dave Dunlap is a professor at the Department of Physics and Astronomy, and the person who put together the physics and astronomy demo at Regener Hall. Members from the Society of Physics Students UNM chapter, taught the hour-long demonstration with a little assistance from Dunlap

The students presented physics tricks that ranged from showing how fiber optics works to making a cube float by superconductivity.

The year 2015 is the International Year of Light and many of the demonstrations based themselves on that premise. With the lights dimmed, green laser-lit water flowed into buckets, and an array of other demonstrations lit up the hall. 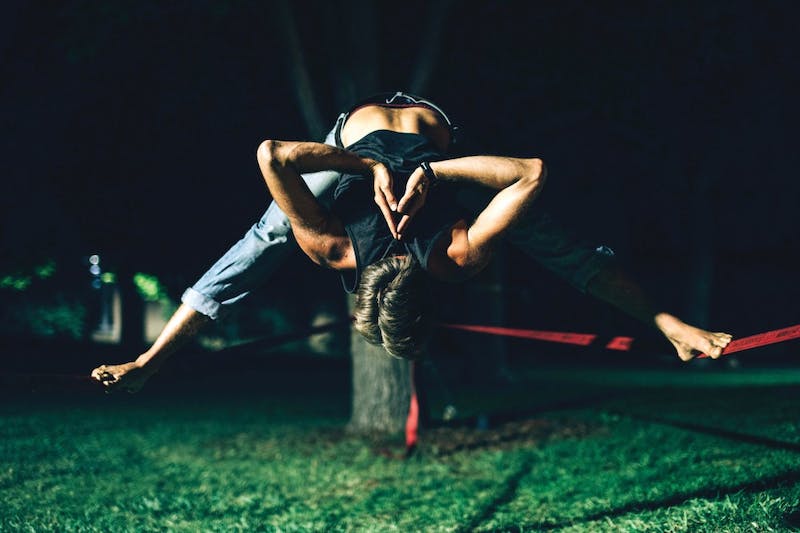 
Every afternoon, one corner of the Duck Pond park makes a transformation into what looks like a giant web of ropes strung between the trees. UNM students and the occasional curious passerby arrive at the spot to “slackline,” an activity based upon traversing these lines on foot above the ground.

"To do so requires an incredible amount of balance and focus," said David Bray, a UNM student studying geology. “But it feels incredible when you finally get it -- like you’re floating. You have to be totally relaxed.”

For many of the students who come to slackline, the sport is a way of relieving stress and unwinding at the end of the day. However, there’s more to the gathering than slacklining: each day students do yoga, meditate, play music, study and socialize in the middle of “The Web.”

As the sun goes down, slacklining gives way to music as people pull out instruments and sing songs together before packing up the lines and heading for home. On the weekends they make excursions to set up lines over rivers and harness themselves to lines high over canyons in the mountains. 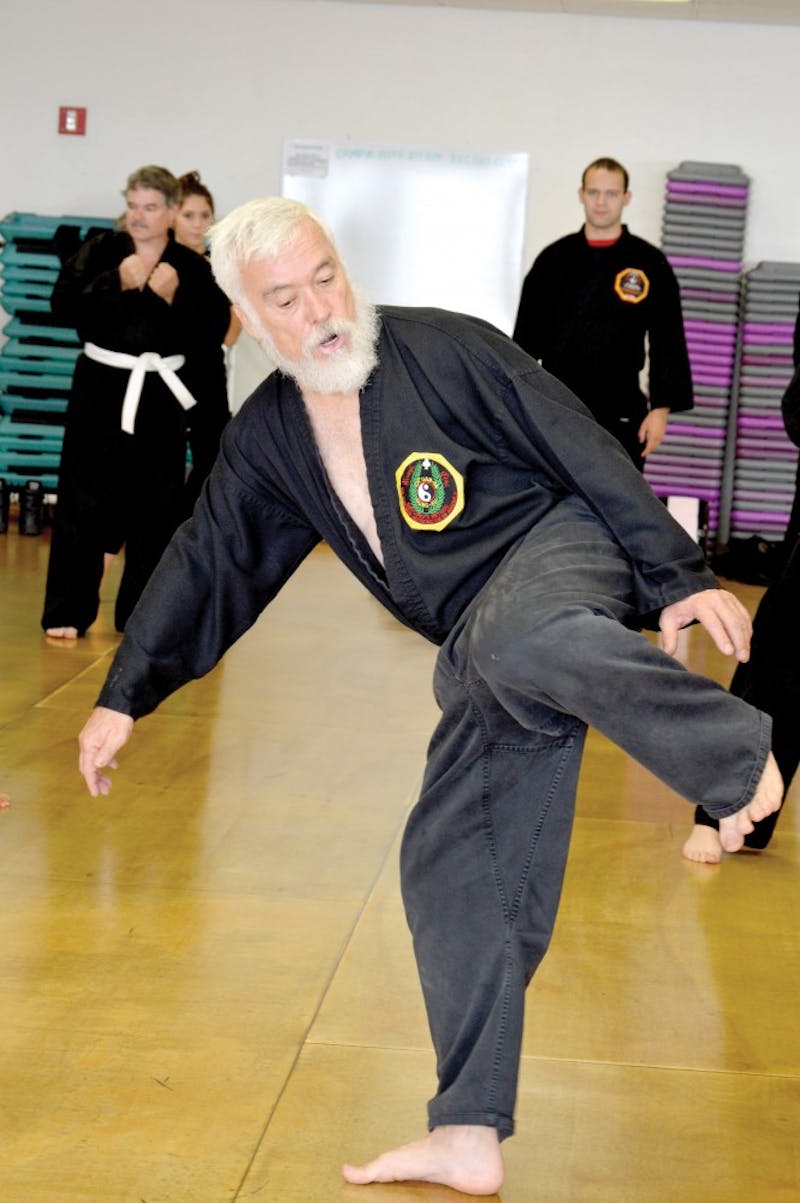 
According to Merriam-Webster dictionary, martials arts are “one of several forms of fighting and self-defense (such as karate and judo) that are widely practiced as sports.”

Daniel Melcor Chavez, a karate instructor in the Health, Exercise and Sports Science Department, said that martial arts aren’t about fighting, they’re about developing a way of life.

“Martial arts isn’t just kicking and punching. There is a lot more respect and self-esteem involved,” he said.

Andrew Mooneyhan, program specialist for Health, Exercise, and Sports Science, said that structure is important for students who lack discipline.

“We have it so that students can take these physical activity classes to be able to experience a structured activity or sport,” he said. 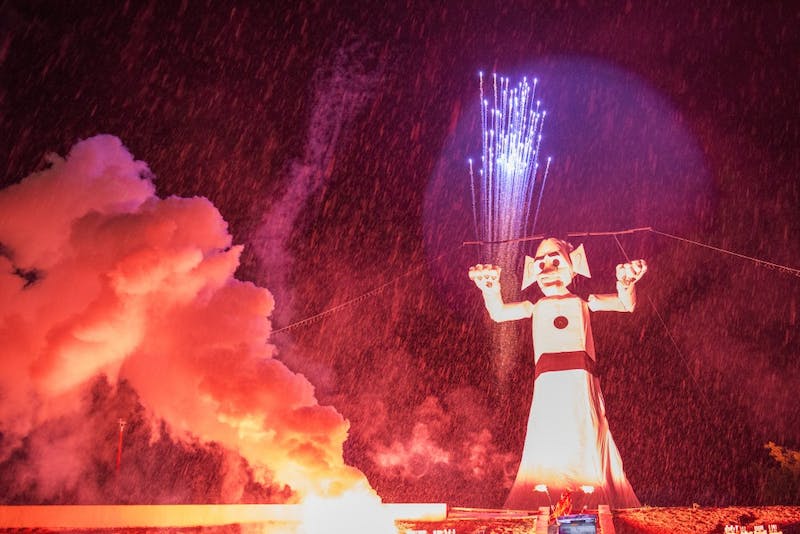 
This past Friday at Fort Marcy Park in Santa Fe, Will Shuster’s Zozobra burned for the 91st time in front of 40,000 people.

The annual event hosted by the Kiwanis Club of Santa Fe consists of the burning of a giant puppet nicknamed “Old Man Gloom.” The burning of Zozobra, the 50-foot mobile statue made of muslin and then stuffed with shredded paper, is said on the event’s website to be based on the belief that “as fire consumes the beast, so go the feelings of gloom and doom from the past year.”

Being that the centennial of the Zozobra event is now only nine years away, the decade leading up to 2024 is going to reflect on the designs of previous decades, last year’s being the 20s and this year’s being the 30s. 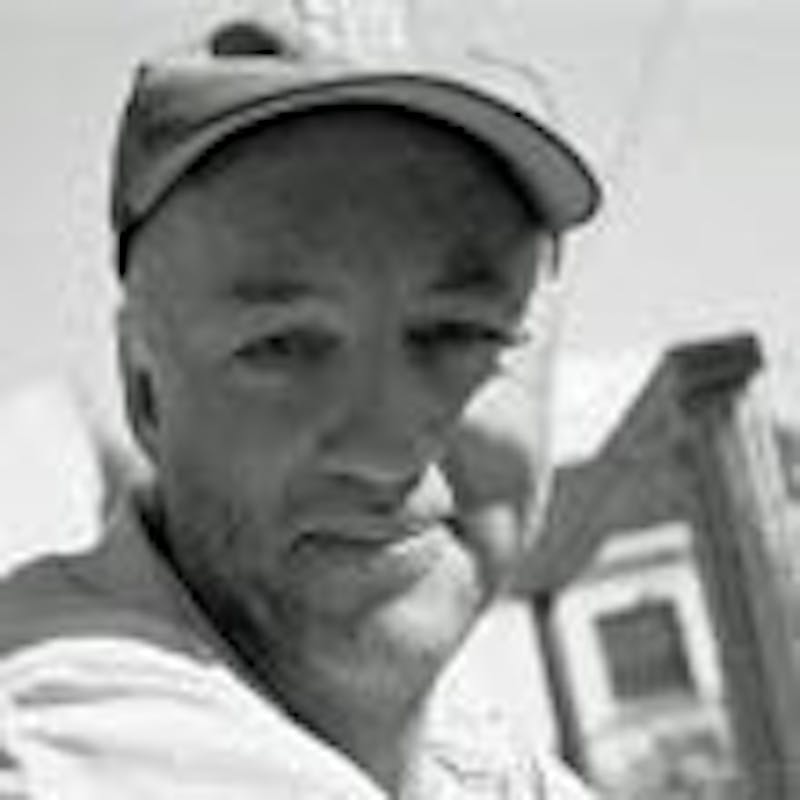 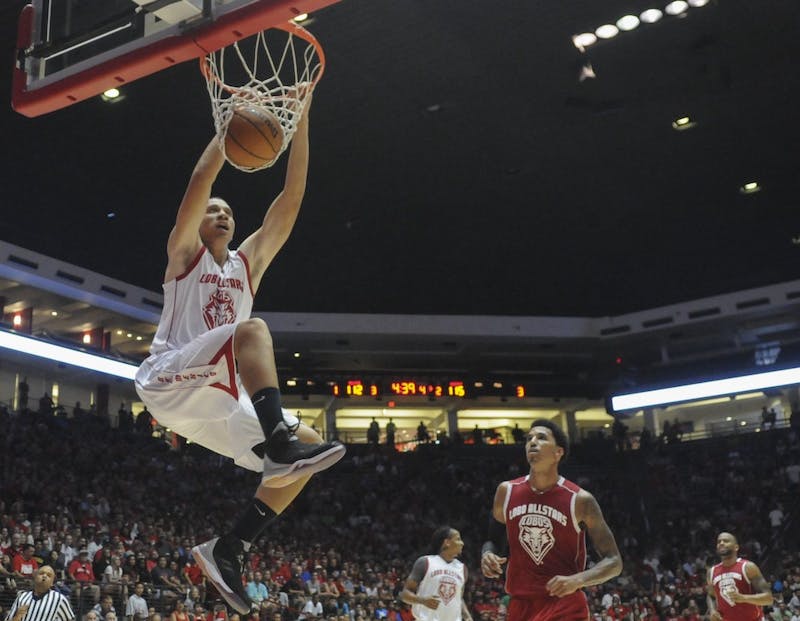 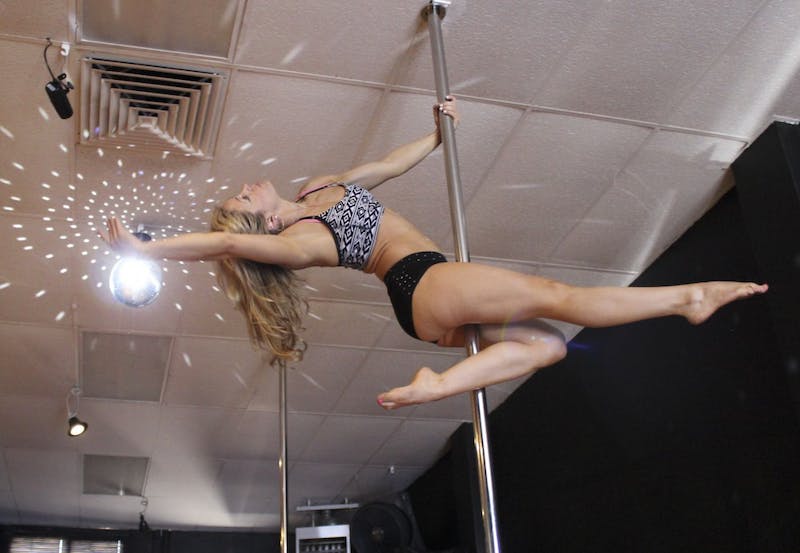 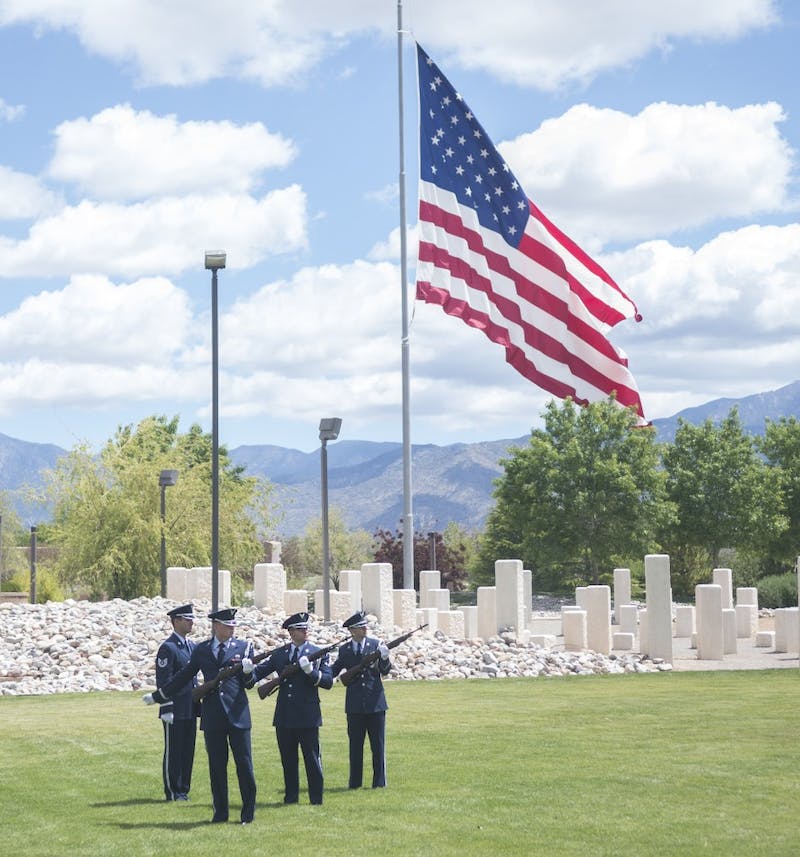 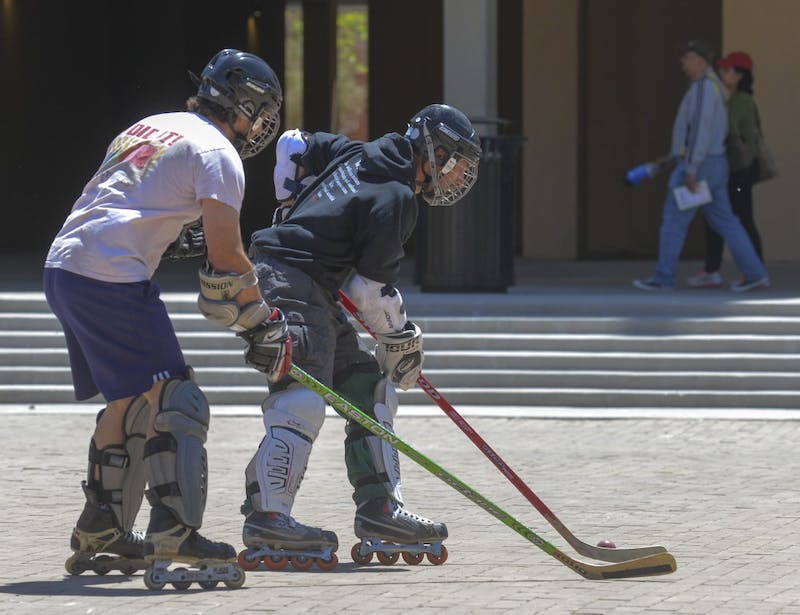 Taking it to the plaza

A large, open, flat concrete surface? Limited foot traffic? Sign them up. Some UNM alumni take advantage of an empty Zimmerman Plaza every Sunday to square off in street hockey. Lacing up their skates and competing hard, they say it offers a reprieve from their everyday work life. 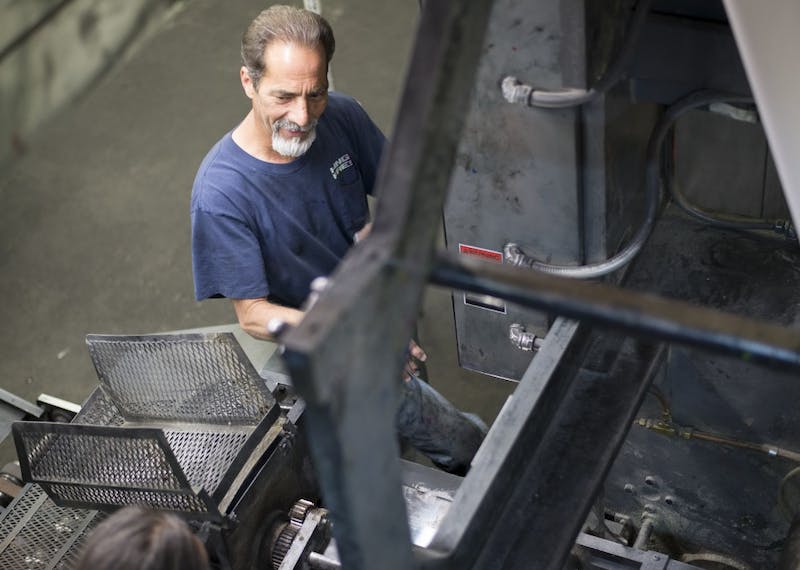 Webs, plates, rollers, joggers and folds are terms that are being added to the endangered diction list, as print journalism is slowly becoming extinct.

Stateofthemedia.org states that from the year 2003 to 2012 print advertising revenues have fallen by roughly $26 million, and online revenues are on a steady incline. With this shift from print media to digital media, daily papers across the country are shutting their doors and turning off their presses.

Vanguard Printing uses a letterpress-style printing press that is completely hands-on and has no computer oversight. During this process, pressmen Brent Sells and John Coates are constantly on the move, checking for focus, alignment and color balances.

Vanguard’s printing press is more complex than sending off documents through a computer, and Sells and Coates are a testament to the art behind it. In the ever-changing media landscape, species of professionals like Sells and Coates might not be around for too much longer. 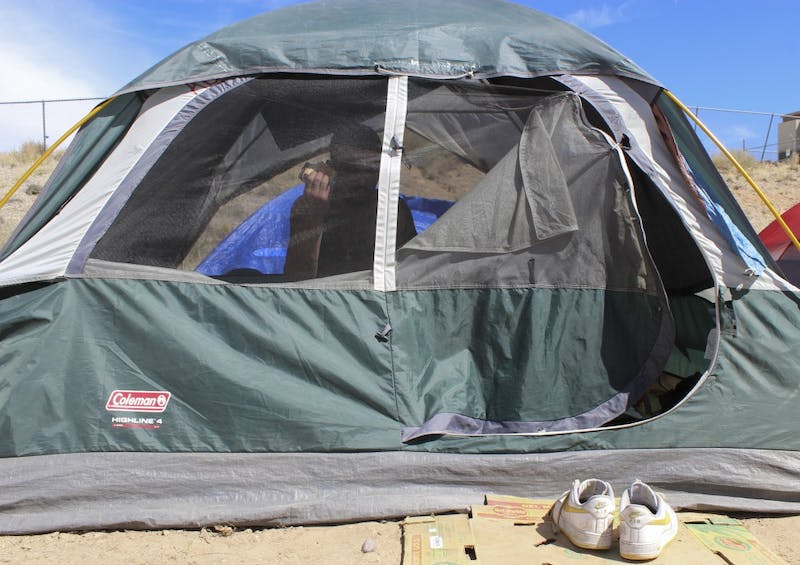 Tent City inhabitants have relocated time and time again throughout their battle with the city of Albuquerque for the right to to call someplace home. With each eviction notice, residents learned to adapt and create new homes wherever they went. This photo essay focuses specifically on the residents’ previous location near Interstate 40 and Lomas Boulevard. The small desert plateau offered little shelter from the immense heat, but the tent city residents offered no complaints. These snapshots represent a day in the life of Tent City. The future of Albuquerque’s Tent Cities has yet to be determined. 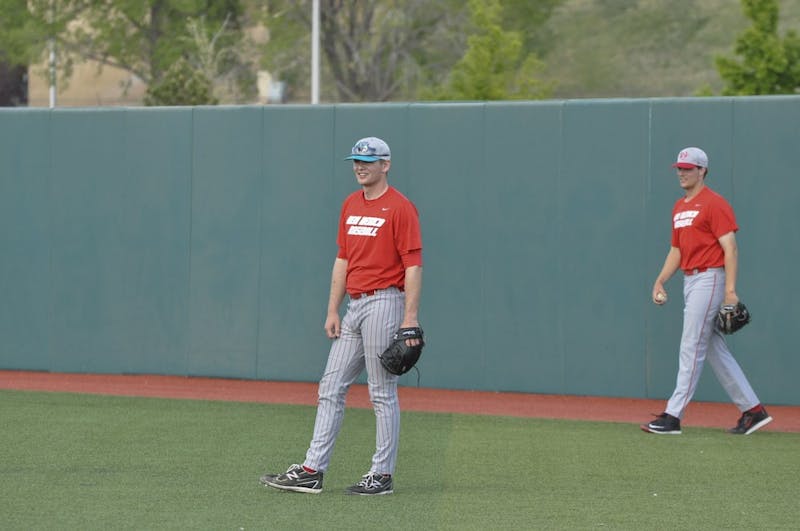 Freshman pitcher Matthew Smallwood has been playing baseball since the age of 5. He has Major League aspirations, but said “there’s a lot of other goals besides winning” that he’d like to accomplish as a Lobo, such as volunteering.

“I feel like we can make a big difference in the community just because we’re a part of the UNM baseball team,” Smallwood said. “But besides that, of course, winning a couple Mountain West conferences and a College World Series would be a dream come true.”

“My mom always told me that hard work beats talent if talent doesn’t work hard, and I really believed in that growing up,” he said.

Smallwood will be in Virginia to play for the Winchester Royals in the Valley Baseball League, a collegiate summer league. 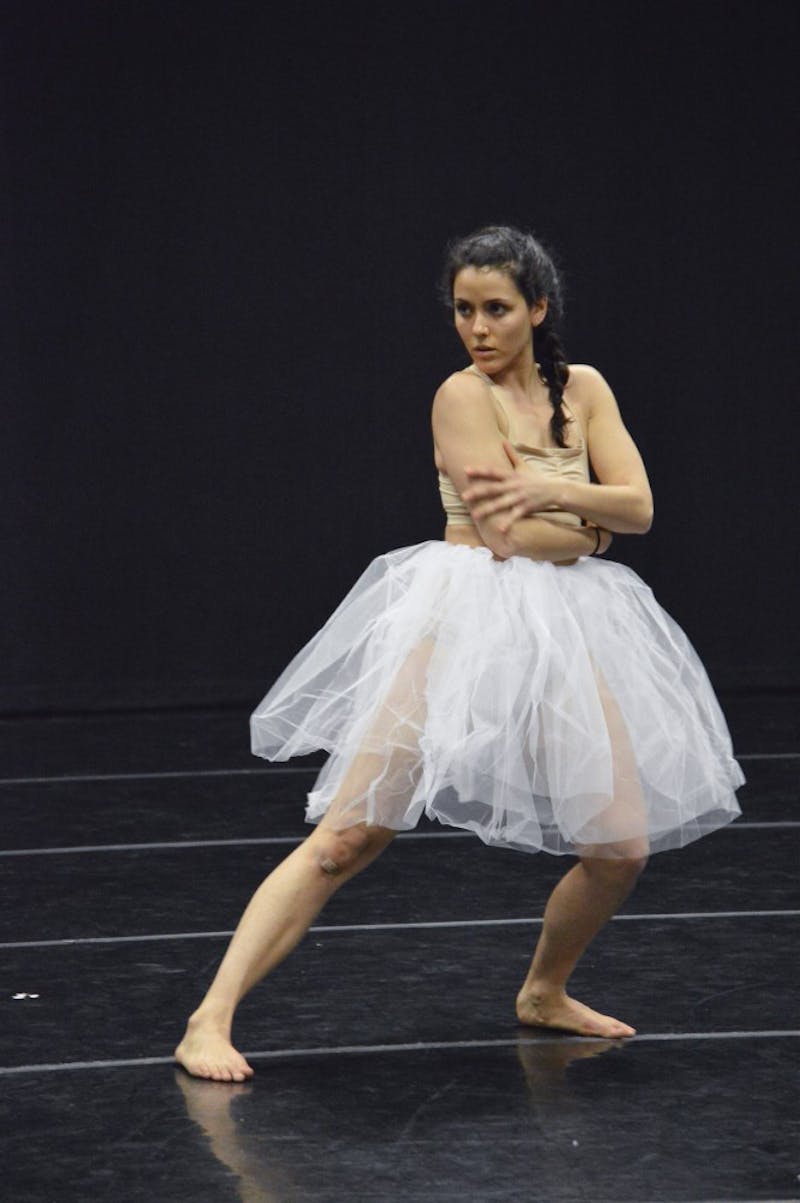 No life without movement

Dalila Baied didn’t start dancing when she was 12 years old. She said she took hip hop and jazz classes, and only began taking dancing seriously when she was 17. “I want to be a dancer,” she said. “I don’t care if I’m not a ballerina or I didn’t start at four years old.”

A December 2014 graduate in psychology and dance, Baied has danced professionally since she graduated at the Santa Fe Opera, and she recently traveled to Austria to work with a dance company.

Baied recently became a certified yoga instructor as well. She began doing yoga as a workout while already in dancing.

“Yoga classes came pretty easy to me since I was already flexible and it was an asset to my dance training,” she said. Baied said she wants to get a master’s degree in psychology later in life, and she plans to continue dancing in the meantime.

“I know I love to dance,” she said. “Movement is something I can’t live without.”