Five and why with John Swinger

Jonathan Swinger, a junior astrophysics major, describes his top five favorite objects in the universe. From nebulae and stars to a planet very similar to ours, we no longer have to wonder what they are and why:

“It’s a big comet that's about 38 times the size of UNM’s central campus. It comes through our solar system about every 75 years. I chose this object because when it does pass by Earth, you can see it without the assistance of any specialized equipment -- you don’t need a telescope or anything. People have been logging it and seeing it from thousands of years back. It's very accessible.” “A galaxy is essentially a solar system revolving around a huge black hole in the center of it, which is so dense that light can't escape from it, characterizing it as a black hole. For instance, if I had a black hole the size of a tennis ball, it’s so dense that you can fit New York City inside it. Even though there are millions of galaxies out there, this is the one we live in. It's pretty interesting that we can't really see what our galaxy looks like, but just from studying what the stars look like in it, we can infer that it’s a spiral galaxy and what it looks like.”

“As you may have seen on a couple articles posted on Facebook, Kepler-22b is an Earth-like planet orbiting around the habitable zone of a huge star. The habitable zone is the distance from a star that a planet must be to have liquid water on it, which, from what we know, is a good sign of life. Other than its distance and mass, we don’t know much about this planet. It’s interesting because it’s a planet similar to ours; it could possibly sustain life. So hopefully we can answer the question if there is life elsewhere. It kind of makes you feel smaller if there is a possibility of life somewhere out there.” 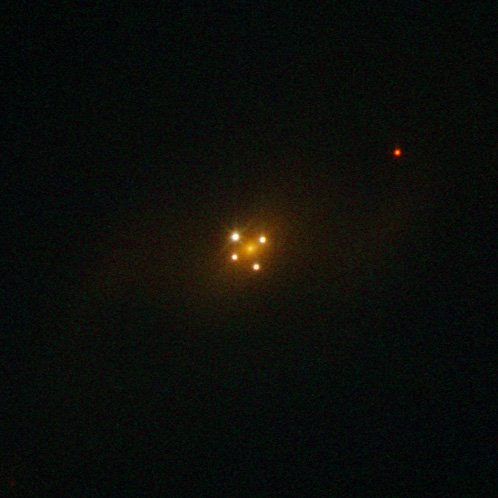 “What makes this object special is that it's given a cross-like shape caused by gravitational lensing, which is the warping of light caused by a massive gravitational object -- in this case, a galaxy. You see four blue balls (shaped in a) cross, so even though light is massless, it still gets affected by gravity. It’s a really special object in the universe because it doesn’t exist anymore, but studying objects like these ones gives us an idea of what the universe was like when it was first created so we can make better theories and understand how we formed. Due to objects being so far, it's interesting how light lets us look into the past.”

“It gets its name from a certain formation that looks like an eagle. It also has three pillars called the Pillars of Creation. They get their name because nebulae are where stars are formed. I like this object because one of the first times I used a high-powered telescope, this is the object I looked for.”

Nick Fojud is the photo editor for the Daily Lobo. He can be reached at photoeditor@dailylobo.com or on Twitter @NFojud.